My wife knows nothing about technology. She doesn’t have a Facebook account and watching her search the web is more frustrating than watching Aston Villa fail to score in four successive Premier League matches.

She cares nothing for the bits and bytes of technology, like much of the world (an oft forgotten detail). But she did mention that she’d heard Apple had released some new technology.

“The Apple iPad,” I said, recognising that while she cares nothing for Steve Jobs’ latest device, she is equally unable to avoid media hype. The iPad – depending on your chosen review – is either a big phone, the greatest innovation ever (since the last Apple innovation, anyway) or the saviour of the publishing industry. Such hype suggests we’re all about to start reading books and papers on our iPads ; my wife’s response to that suggestion?

“Reading is all about relaxing, so why would anyone choose to read a computer screen?”

I live in a place called Wanstead. If you live in London, it’s on the Central Line loop; if you don’t, it’s to the east. Wanstead is nice. My Dad is always saying: “What I don’t get about this London is that even when a place is nice, there’s something really grim just round the corner.”

He’s right, of course, but he lives in Warwick. And that is basically the posh Midlands. So, he’s a bit spoilt. But Wanstead – when it comes to London and it’s rather frustrating mix of nice and grim – is fairly grand. That sense of grandness is provided by the wide, tree-lined streets, some splendid period architecture and some lovely open spaces, such as the green on the High Street and Wanstead Park.

The village – if you can call Wanstead a village when it’s five minutes from the M11 and served by two Underground stations – has managed to retain a strong identity, particularly as the rest of east London is either being smashed for the Olympics or going to the dogs (or not, in the case of the former dog track at Walthamstow Stadium).

Then last week, a Tesco opened on the Wanstead High Street. It’s been a source of conjecture, debate and protestation. The store takes the place of a former Woolworth’s (RIP, you good retail friend). The protests against the store have been long and loud (hence the delay in the store opening). A particularly vocal compaigner has been a chap called Ashley Gunstock, who admitted using the Leytonstone Tesco branch after being ‘outed’ by a local newspaper. It’s been that sort of debate.

People objecting to the store say Tesco will kill shops on the High Street. Like elsewhere in the UK, shops are always opening and closing in Wanstead – and I guess the presence of a retail giant is hardly likely to help the independents. And the community of Wanstead – and it does have a nice community; we know all our lovely neighbours – seem keen to ensure the shop is empty.

Which is why I was surprised to see people virtually fighting to get into the Tesco earlier this week, while the local Co-op – which is normally packed – was the retail equivalent of the Mary Celeste: “It’s always like this now,” said one of the workers to me at the Co-op.

Change, eh? Who needs it? Virtually everyone, it would seem.

My daughter is three this weekend. To commemorate this momentous occasion, I’m going to record another of her five favourite games (and she’ll get some presents, too):

“Deciding on a name for your baby is one of the hardest decisions you’ll have to make,” starts the A-Z of Baby Names. Maybe, maybe not. But if you’re struggling, pay careful attention to the advice on the back of the same book: “These days, virtually anything goes when it comes to babies’ names!” (Note the exclamation mark, because chosing an unusual baby name really is that much fun!!!)

In fact, if you’re really stuck for names, just turn to page 14 and pay careful attention to the lists entitled: “Made-up names for boys and girls”. Here are five of the book’s made-up suggestions for boys:

And here’s five of the book’s made-up names for girls:

But what about when you’ve run out of ideas because all your mates have already picked all the Dantrells and Keoshawns? Don’t worry, just make up some of your own – and here are ten suggestions from me (I might turn this into a baby name book, because there’s only 487,549 on the market right now and someone could make 38p from a book like this):

I was on holiday in Norfolk last week. Very nice it was, too. I hung around on the beach with my family and counted crocodiles with my daughter. That second bit was in a zoo, by the way – not on the beach…

Fading in and out of network coverage, I spent most of my time in East Anglia without the information conduits that provide my daily fix of Aston Villa news (the Worldwideinterweb), pointless babble from people I don’t really know that well (Twitter) and pictures of people I once knew doing REALLY CRAZY THINGS, like drinking (Facebook). I’ll be honest; I missed all that online rubbish.

I mean, it’s good to go without stuff you like once in a while. Like having a period without booze, dropping your reliance on email and web stuff can leave you feeling cleansed and healthy. My lovely wife – bored with my continual logging on – used to challenge me to have internet free days (IFDs).

I’ve done a few IFDs. They’re OK, but you spend most of the day thinking about how you can stop yourself from logging on. Which means you’re just as internet-obsessed as usual, only you’re thinking rather than actually doing.

A seven day IFS (internet free stretch) allows you to move beyond thinking/stopping/doing. There’s that first period of twitchiness, but you slowly get used to having no online access. In fact, you start to rely on other conduits; in Norfolk, I bought a newspaper every day and read it cover to cover. And I even used Ceefax on our non-digital TV. Yeah, man – old school.

Anyway, I’m back home now and the first thing I did was turn on the computer. I discovered I’d missed out on absolutely nothing, but it was nice to have ‘new faithful’ back. It’s tragic, I know. But I am a sucker for all that online crap.

So, I was on my third Tube home tonight (I had to get a combination, due to the Underground strike) and there was a woman sitting next to me, busily telling her mate on the phone about:

Yeah, you show them. And while you’re at it, leave the train, too – and take your loud, boring, self-indulgent conversation with you. Talking of self-indulgent musicians…

Prior to my two-year-old daughter being born, I used to waste hours cutting up existing records, making loops and creating new tracks. My wife hates them, which is the main thing: “Turn that bloody noise off,” would be her review.

My daughter is now fast approaching two and a half years old. Seeing as a month or two in a small child’s world is equivalent to a couple of years in a balding father’s life, I thought I would update her list of favourite games. Some of the old favourites – Shop, Cave, Doctor’s – are still popular. But some new entrants are favoured, too:

Regular readers (hello, Mum and Louise) have complained that they want me to post more stuff about my daughter. I am about to grant their wish. Kind of.

So, one of the joys of having a little child is that you can watch Disney movies for hours and hours on end. And I mean hours. Bambi was a recent favourite, though we have to fast forward the bit where Bambi’s Mum ‘goes’ and the whole second half of the movie when Bambi and his chums become old. Apparently, babies are best.

My daughter is also obsessed with her toys coming to life, which made Toy Story an obvious purchase. Bought last week, both Toy Story and Toy Story 2 have now been watched within an inch of their digital lives. The second film – in case you’ve forgotten – is a morality tale (what else? After all, it is Disney) about grown ups collecting toys, when they should really be played with by kids.

So, we’ve loved the films and the characters, such as those cool, green aliens that go ‘Oooooh’. My wife remembered we had one of the little aliens upstairs. Even better, the alien key ring was still in its packaging. Which meant I was able to pass it off to my daughter as a ‘new toy’, rather than a piece of tat I’d forgotten that was stuck at the bottom of the wardrobe.

First, it seems weird that I’d kept the toy in the packaging. Was I keeping it fresh to auction at some later date? No, I’d simply bought it in the US and lobbed it in the wardrobe. As I said, I’d forgotten about it – honestly.

So, I gave the toy to my daughter. And then the obvious thought entered my head: was my packaged alien key ring actually worth something? After she tore open the packaging, I checked eBay and found stacks of ‘pristine’ collectables for sale. Err, great. But isn’t that slightly crap?

And even worse, I bought both DVDs – because they were cheaper in this form – in a ‘Collectors’ Special Edition’ box. Which is even more ironic, seeing as the makers of the film have endorsed the ‘collectability’.

Toy Story 3 is out next year, which is great. So, expect more collectables and limited edition Buzz Lightyears. And as my daugther said to her Mummy just three minutes ago: “When’s Christmas?”

Hey, now that’s irony. And the key ring is worthless, by the way.

My daughter is 25 months old. She has a bunch of favourite games but the following five are probably the most popular:

Copyrighters and marketing dudes love to find a sales gimmick and flog it within an inch of its life. Take the seemingly straightforward ‘my first’ concept, which allows companies to tag products that are intrinsically linked to childhood, such as dolls and toy cars. The result should be a tug at parents’ heart strings and a consequential tug on the purse strings.

Except it’s not always as simple as that. M&S is tagging everything ‘my first’, from model steering wheels to polar bears. But perhaps the oddest is ‘My First Interactive Giraffe’: 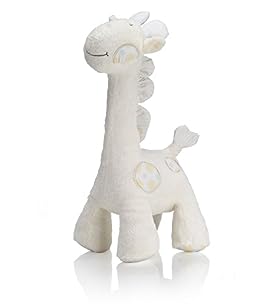 Great, eh? I mean one thing’s for sure – you never forget your first interactive giraffe, do you? It’s like a rite of passage.

Which – apart from the rubbish English and lack of clarity – explains absolutely everything. Ah, no. It doesn’t, actually. Apologies.